Helicopter blades are flexible and bend significantly in flight.  You can see it in high speed video like this.  To analyze a helicopter in detail, this bending must be computed.  It affects the aerodynamics and even the handling qualities of the helicopter.  This article explains one of the simpler methods to compute blade bending, namely the use of normal mode shapes.  While simple relative to other approaches, this is still not easy.  This is a technical article and requires a calculus background.

The physics are based on classical beam bending theory.  For small displacements, the bending moment is proportional to the curvature of the blade, i.e.  $$\begin{equation} K(x)y''(x) = m(x) \label{eq:beamth}, \end{equation}$$

where \(m\) is the bending moment, \(K\) is the stiffness of the blade (depending on the construction), \(x\) is the distance along the blade, \(y(x)\) is the distance the blade has moved from the undeformed position and \(y''(x)\) is the second derivative of \(y\) with respect to \(x\) (the curvature).   This equation, along with inertia and the external forces applied to the beam (aerodynamics), govern the “elastic motion” of a blade.  We’ll start with a simple, static example below and gradually move on to the general scenario.

In this example, we remove the force \(F\) that was applied to the tip of the blade in the prior example.  There are no external forces acting on the blade, only its internal inertia and stress.  As you might expect, the blade will not just settle into the undeformed position, but instead will oscillate about that position.  The situation is much akin to a spring / mass problem, but the restoring force is proportional to blade curvature instead of displacement.  Hence, you might expect an oscillatory solution where the blade vibrates about it's equilibrium shape.  This will be the case, but with a slight added complication.  A 1-dimensional spring/mass problem has just one characteristic frequency that it oscillates at.  A helicopter blade will oscillate at various frequencies, each associated with a different "mode shape" of the rotor blade (like a stringed musical instrument).  We will find that the differential equation \eqref{eq:beamth} has a solution

Since the left side of this equation is only a function of \(x\) and the right side is only a function of \(t\), both sides must be constant.  This provides two new differential equations by equating the numerator of each side to a multiple of the denominator.  The right side shows that the second derivative of \(f_n\) is a multiple of \(f_n\) which is a well known oscillatory system with (real) solutions $$ \begin{equation} A_n\cos \omega_n t + B_n \sin \omega_n t \end{equation}$$

This differential equation has (real) solutions

We estimated static blade deflection and then found the frequencies (with mode shapes) of a freely vibrating blade.  In order to be useful for real-world problems, we’ll need to compute the motion of nonuniform blades (\(K(x)\), \(\rho (x)\) not constant) with arbitrary forces acting on them.  Such forces include aerodynamic forces \(F(x)\) acting along the blade, inertial forces due to hub motion, and centrifugal forces due to rotor rotation. The math gets tedious and is solved numerically on a computer.  We won’t get into the tedious math here, but will outline how this is done in many software models of rotorcraft.  If interested, the standard reference for this work with details we’ve omitted is NACA Report 1346 by Houbolt and Brooks (this does maintain several assumptions including no plastic deformation, small angles of elastic twist and neglects some inertial forces).

Like Houbolt and Brooks, we’ll consider models that use the mode shapes of free vibration \(\hat{y}_n\), which we computed above.  Although the blade won’t be vibrating freely here, this approach works well if we replace the \(f_n\) with appropriate time varying quantities called “mode participation factors,” denoted \(\delta_n\).  The \(\delta_n\) are a function of the forces applied to the blades.  Only a finite number \(N\) of modes are used (the ones with the \(N\) smallest frequencies \(\omega\)), so that the blade shape at time \(t\) becomes

The blade will also be discretized radially into a number of segments as shown in the diagram below.  Typically 5 to 25 segments will be used.  The user must input blade properties like \(K\) and \(\rho\) at each segment.  The software will estimate the forces acting on said segments and use those forces to compute the mode participation factors \(\delta_n\). 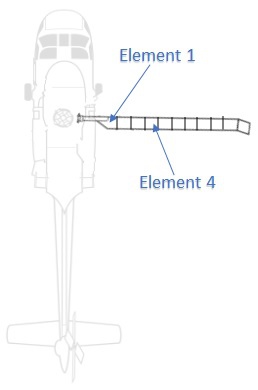 For simplicity, our examples above included only one degree of freedom (DOF) along the blade - \(y\) had a single value for each pair \(x,t\).  Models for real-world application typically include three DOF: out-of-plane, in-plane and twist motion.   The motions are all coupled, so that a mode shape consists of the three values at each radial section (but still a single mode participation factor that scales all 3 values by the same amount).

The question now is how to compute the \(\delta_n\).  We won't derive this, but as you might expect the \(\delta_n\) are “accelerated” by applied forces.  They are driven by a second order differential equation

where \(I_n\) is a “generalized inertia” associated with the mode shape \(\hat{y}_n\), \(F_n\) is the “virtual work” done on \(\hat{y}_n\) and \(\zeta_n\) is a sometimes added artificial damping term.  These values may be computed under various assumptions, e.g. assuming certain hub motions or blade pitch acceleration are negligible.  We won’t go into details here, but roughly speaking the virtual work is the inner product of the forces and the mode shape \(\int_0^R F(x)\hat{y}_n(x)dx\).  You may think of this as the force applied to mode \(n\).

Stay tuned, we plan on adding an example here and even posting source code to solve such problems.

A survey of these and other models was done by Wayne Johnson:  A History of Rotorcraft Comprehensive Analyses.