Helicopters are aircraft that use rotating wings as the primary means of lift and propulsion.  This enables helicopters to fly efficiently in low airspeed conditions including hover.  With this capability helicopters can follow slow moving or stationary targets on the ground and even land in areas with little or no runway.  Helicopters come in various configurations including the traditional main rotor, tail rotor configuration in the following picture. 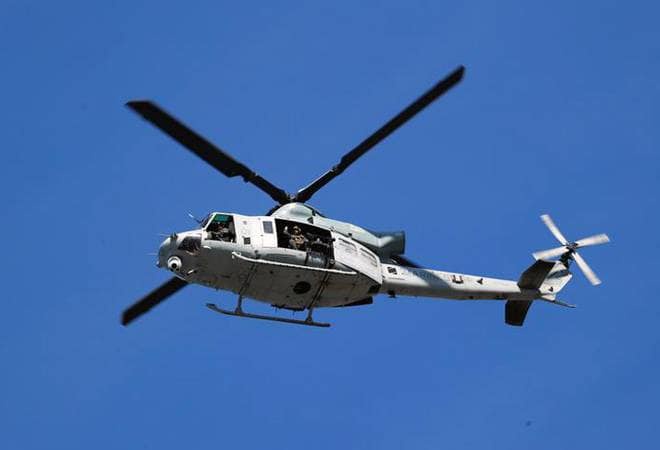 As already mentioned, the primary advantage of a helicopter over a fixed wing aircraft is the ability to fly efficiently at low airspeeds.  Other aircraft like the F-22 and Harrier can hover, but without a large rotor they are extremely inefficient - the fuel consumption per unit weight is very high.

Of course, helicopters also have disadvantages relative to fixed wing aircraft.  One is complexity.  Helicopter rotors consist of slender, flexible blades that operate in "dirty air" contaminated by vortices.  In forward flight, aerodyamics change quickly as a blade revolves around the helicopter.  At one instant a blade is moving in the same direction as the helicopter.  A fraction of a second later the blade has revolved 180 degrees and is moving against the aircraft forward speed and hence has a much lower airspeed.  While it's rotating, this slender blade also bends and twists enough to significantly impact aerodynamics.  This means that even basic rotor analyses are required to handle unsteady aerodynamics, trailed and shed vorticity, and structural dynamics in a coupled fashion.  This coupled unsteady aeroelastic analysis is much more difficult than the same level of analysis for a fixed wing, which only requires steady aerodynamics.

Another disadvantage is speed.  While a large rotor facilitates efficient hovering, it impedes high speed flight.   Consider a rotating helicopter blade as the aircraft flies at high speed.  On one side of the aircraft the blade's airspeed far exceeds the aircraft, but on the other (retreating) side it's much slower.  This means one side encounters much more lift and drag than the other.  This imbalance is overcome to some extent by a helicopter’s cyclic blade pitch and flapping, but it becomes insurmountable around 200 knots (conventional helicopter).  Different helicopter configurations can work around this problem to various extents, but generally there will be an efficiency or complexity (cost) penalty.

The ability to hover efficiently makes helicopters ideal for aerial observation tasks including search and rescue, law enforcement, news and tourism.  A helicopter can hover at a position with an ideal view of a target.  When the target moves, the helicopter has the unique ability to adjust its heading by a full 360 degrees, shift its position in any direction forward/backward, side/side, up/down and/or follow a moving target no matter how slow.

Helicopters are used to transport people (military and civilian) in scenarios where other vehicles are unsuitable.  Examples include oil rigs (offshore or remote land locations), military targets where little/no runway is available and emergency medical transportation (MEDEVAC) from remote locations to large hospitals.

Helicopters are also used to transport cargo.  One example is firefighting: specially equipped helicopters can lift water from nearby sources (lakes, rivers …), carry it and dump it on a fire.  Another example are aerial cranes, which are large helicopters that can carry transmission towers or even prefab homes in a sling under the aircraft.  These are handy for placing radio towers atop hills/mountains where roads are impractical.

Helicopters are also used for military attack operations.  Helicopters may be equipped with a variety of machine guns, rockets and missiles primarily intended for ground targets.   Modern attack helicopters destroy about 17x their own production cost in their lifetime.