This article discusses how loss of power (e.g. an engine failure) is handled in a helicopter.  Like a fixed wing aircraft, loss of engine power is not a death sentence.  It’s possible to “glide” to a safe landing zone and land a powerless helicopter via a process called autorotation.  This process is described below.

Upon losing power, two abrupt changes occur.  First, the helicopter yaws.  The yaw direction is nose left if the main rotor spins counterclockwise (CCW) viewed from above.  This is caused by the loss of engine torque to the main rotor, which applied an equal and opposite "reaction torque" to the fuselage.  Pilot's use their pedals to counter this yaw (right pedal for a CCW-spinning main rotor).   The other abrupt change is loss of rotor speed.  Rotor speeds below about 85% in flight can be deadly.  The pilot must lower the collective control and potentially pull aft cyclic to minimize rotor speed loss.  The lower collective control reduces drag on the main rotor and causes the helicopter to accelerate downward.  With enough descent rate, aerodynamics alone will maintain rotor speed: the rotor is powered like a windmill.  If the helicopter is flying with sufficient forward speed, aft cyclic can also be very helpful.  This pitches the nose up and allows the high-speed oncoming air to blow up through the rotor.  This also powers the rotor like a windmill.  This aft cyclic / pitch up is only temporary.  In this state the helicopter will slow down and the windmill effect will diminish.  The cyclic is moved forward again and the pitch is removed when the lower collective and descent rate are sufficient to power the main rotor.  The cyclic may be further adjusted to reach an airspeed that's optimal for steady autorotation.

The collective drop, right pedal and optionally aft cyclic are all done quickly, as soon as the pilot detents the loss of power.  If executed properly, the helicopter will settle into a steady descent rate and rotor speed and the next phase of autorotation begins.

Just as in powered flight, turns may be required to reach the LZ.  These are executed in much the same way as powered flight, but with the added complication of maintaining rotor speed.  The rotor tends to speed up when a helicopter turns in autorotation, so the pilot must pay particular attention.  We describe the physics of these turns in a separate section below.

Approaching the LZ the helicopter must reduce its forward speed and descent rate quickly.  Flaring, or pitching the nose up, does both simultaneously.  When the aircraft pitches up more air flows up through the rotor than in descent.  This increases rotor thrust, delivering both a vertical and aft force.  As the vertical and forward speeds approach safe values the pitch is removed with forward cyclic.  This enables the helicopter to land flat on the ground.  As the cyclic is moved forward the collective is increased to keep the descent rate small and soften the landing.  At this point the rotor speed drops.   Timing is critical here.  If the flare is executed too high above the ground, the helicopter will drop a longer distance after the flare and accelerate down.  This will result in a harder ground impact with a lower rotor speed.  If the flare is done too late the helicopter will contact the ground before the descent rate and/or forward speed is sufficiently arrested, also resulting in a hard landing.

While most of the forward speed is removed in the flare, it's not always necessary to remove it all.  With a suitable LZ, the helicopter can land with some forward speed and slide or roll to a stop.  This makes the landing slightly easier for the pilot.  However, in some cases the terrain may not allow for a sliding landing.  In such cases, pilots must reach zero ground speed just before touching down, called a "zero-zero autorotation" (0 speed at 0 altitude above ground).  This is more difficult and typically results in a harder ground impact.

How do the rotors keep turning?

The acceleration of the rotor is proportional to the net torque acting on the rotor.  This follows from Newton’s equation F=ma.  Normally the engine supplies (positive) torque to counter (negative) torque from rotor aerodynamic forces.  The result is zero net torque and constant rotor speed.  Without the engine, aerodynamic forces alone must result in zero net torque.  We’ll see that the air flowing up through the main rotor (due to the aircraft descent), along with the aerodynamic shape of the blades, facilitates this.  The main rotor is geared to the tail rotor and effectively powers the tail rotor in autorotation. 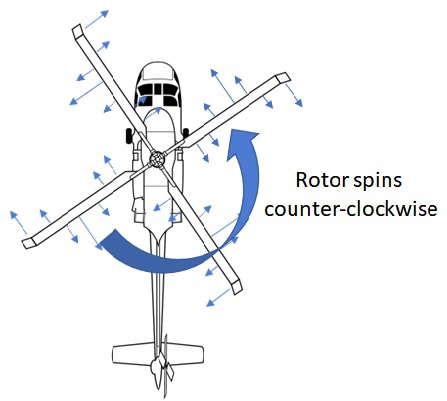 If we zoom in on sections of a rotor blade, each by itself generally provides nonzero torque.  For example, the innermost and outermost portions of a blade typically would slow the rotor in autorotation.  We'll call this negative torque.  However, a portion of a blade between these two regions provides positive torque.  In total, the torque sums to zero, facilitating constant rotor speed.  The direction of torque contribution is shown with arrows in the picture above.  Below we’ll investigate the aerodynamics of cross sections of a blade in detail.  Specifically, you'll see how a section can provide positive torque like a windmill. 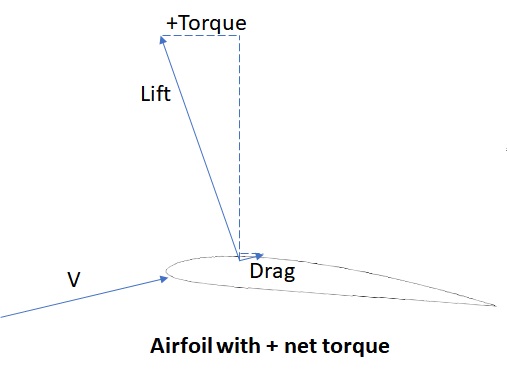 A cross section of a blade is shaped like an airfoil shown in the diagram above.  A key property of these airfoil shapes is high lift relative to drag.  Lift is the aerodynamic force acting perpendicular to the relative air velocity \(V\), while drag is parallel.  Since the aircraft is descending at a high rate and the rotor is spinning, the relative air velocity to the blade is at an angle shown in the diagram above.  It's mostly right, but with an upward component due to aircraft descent.  Since lift is perpendicular to \(V\), it's tilted slightly left, into the direction of rotor rotation.  The drag mostly acts against rotor rotation.  Since the lift is so much larger than the drag, the forward component of the lift (the dotted horizontal blue line at the top) has the potential to more than offset the aft portion of the drag.  This results in positive torque that allows the rotors to maintain speed without engine power. 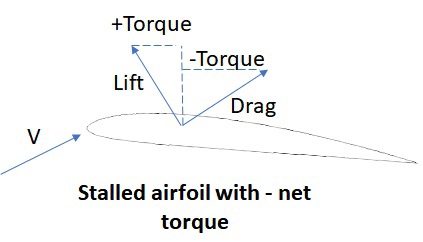 You may wonder why the inboard and outboard sections of the blade do not contribute positive torque.   The speed of a blade section due to rotor rotation is proportional to the distance from the center of the rotor.  This is very small for inboard sections and very large for outboard sections.  This results in a large angle of incidence \(\alpha\) inboard and much smaller \(\alpha\) outboard.  Above a threshold \(\alpha\), drag increases significantly and lift decreases.  This is called stall, and in this context stall prevents inboard sections from producing positive torque.  This is shown in the diagram above.

The small \(\alpha\) outboard prevents positive torque in three ways.  First, it shrinks the lift-to-drag ratio relative to the "positive torque blade sections."  At small incidence angles drag decreases slightly, but lift decreases dramatically.  Next, the lift force (perpendicular to \(V\)) is directed more upward.  So the lift is both smaller and directed less favorably.  Finally, the drag is also directed less favorably.  Drag is parallel to \(V\) and hence more aft.  This is all summarized by the picture immediately above.  Together, this results in a negative torque contribution outboard.

How do things change in a turn / maneuvering?  When the helicopter turns it rolls to a blank angle, say, \(\phi = 35deg\).  At the same descent rate, the up flow through the rotor drops about 20% (from \(w\) to \(w\cos 35^o \)).  Thrust and rotor speed cannot be maintained in this condition.  The helicopter accelerates toward the ground, increasing flow up through the main rotor.  This persists until vertical aerodynamic forces, primarily from the main rotor, can support the helicopter’s weight.  At this point, main rotor thrust will be significantly larger than in level autorotation.  In addition to countering the helicopter's weight, there is a large amount of thrust parallel to the ground, in the direction of the turn.  This counters the centrifugal force that would otherwise push the helicopter out of the turn.  To reach this condition, the flow through the main rotor must be significantly larger than in level flight autorotation.  This means the rotor speed will increase in a turn.  Collective is increased to counter this and maintain safe rotor speed.