In this section we provide a derivation of the flapping dynamics for three simple scenarios.  We’ll see why cyclic controls impart max pitch roughly \(90^o\) ahead of where the blade reaches peak flapping (e.g. why left lateral cyclic provides max pitch around \(\Psi=0^o\) to flap the rotor up at \(\Psi=90^o\)).   We’ll see how this angle shrinks with the addition of a flap spring or the outward movement of the flap hinge.  Click here for definitions of symbols and abbreviations used here and throughout our site.

First, let’s recall a few equations from Newtonian physics.  The rotational analog of Newton's \(F=m\ddot{x}\) for a blade flapping about a hinge, with flap angle \(\beta\), is \(M=I \ddot{\beta} \) or $$\begin{equation} \ddot{\beta}=\frac{M}{I} \label{eq:betadd} \end{equation}$$ where \(M\) is the moment about the flap hinge and \(I\) is the flapping inertia of the blade about the flap hinge.

If a torsion spring is present at the flap hinge, it provides an additional moment $$\begin{equation}M_k=-k\beta \label{eq:tors} \end{equation}$$ where \(k\) is the stiffness of the spring.

Now we'll use this information to derive the flap dynamics in three simple scenarios.

Scenario 1:  Free flapping about a hinge at the center of rotation

This is analogous to the differential equation for a spring and mass system with the known solution $$\begin{equation} \beta (t)= \beta_m\cos(\Omega t+ \Psi_0) \label{eq:s1} \end{equation}$$ where \(\beta_m\) (the max flapping angle) and \(\Psi_0\) depend on the initial conditions.

In other words, the blade undergoes periodic motion with frequency exactly equal to the frequency of rotation.  This mathematical “coincidence” means that the blade returns to the same flap angle after exactly one revolution.  If the flap angle at \(\Psi_1\) is \(\beta_1\) then the flap angle will return to \(\beta_1\) on the next rotor revolution when the blade is at \(\Psi_1\).  In the context of rotors, frequencies are often stated in units of “per rev” rather than per second.  For example, what we've just shown in that the flap frequency is 1 per rev.  This is sometimes denoted as 1P.

Scenario 2:  The addition of a flap spring

Although this frequency is larger than 1P, the rotor undergoes motion that's dominantly 1P.   This is because each blade encounters large, 1P aerodynamic forces.

Clearly the frequency increases with \(a\).  This is because the "centrifugal moment" due to a section of blade is proportional to \(r(r-a)\) while the inertia due to the same section is proportional to \((r-a)^2\).  Hence \(I\) decreases more than \(M\) as the hinge is moved outboard, increasing \(\ddot{\beta}\) and the flap frequency.

Advantage of a flap hinge offset

We’d like to point out a feature of a hinge offset.  The centrifugal force acting on a blade created the moment \(M\) described above, but it also applies a force to the hinge radially outward, parallel to the flapped blade.  Without a hinge offset, and with roughly opposite flapping on opposite sides of the azimuth (\(\beta (\Psi) = -\beta( \Psi + \pi )\), the force from one blade cancels the force from the blade on the opposite side of the azimuth and therefore can be neglected.  However, with a hinge offset, components of these forces parallel to the shaft create a moment about the hub.  The moment is exactly as would be desirable to enhance the moment created by tilting the rotor thrust.  For example, in picture below, the upward displaced aft blade pulls the aft hinge up (and aft).  The the front blade pulls the hinge down (and forward).  The forward and backward components cancel, but the up and down components (multiplied by the moment arm \(a\)) add together to create a nose down pitch moment.  Furthermore, this moment is not reliant on thrust.  This enhances the safety of the helicopter, giving the pilot roll and pitch control in low thrust conditions.  Crashes in helicopters with teetering rotors have been attributed to control loss in low thrust conditions. 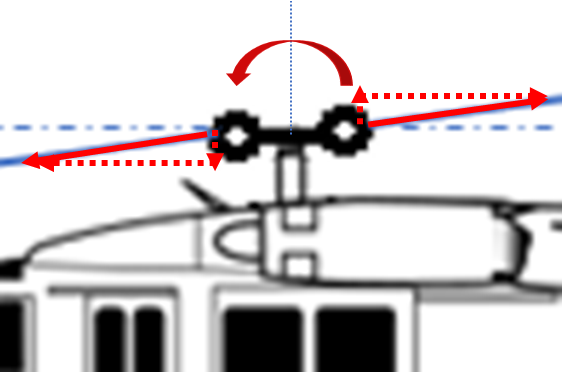