This article discusses the main components of a traditional helicopter.   It includes the rotors, engine, fuselage and stabilizing surfaces.

The main rotor is the most sophisticated component of a helicopter.  It produces thrust that lifts the helicopter off the ground, propels the helicopter in forward flight and facilitates pitch and roll control.   Most main rotors have two to eight blades connected in the center at a hub.  These blades can be thought of as wings that rotate.  The hub attaches the blades to the rest of the aircraft and provides the means for feathering the blades, which controls the helicopter.  Unlike smaller UAVs you may have seen, traditional helicopter rotors spin at essentially constant speed.  Rotor speed is not used as a control mechanism.  Control is achieved purely by feathering the blades as described here.

The main rotor allows the helicopter to hover, fly at low airspeed and takeoff / land in locations without a runway.  A normal airplane or jet wing requires significant speed to generate enough lift to fly.   Main rotor blades always operate at such speed, even when the aircraft is hovering.  Unfortunately, this advantage comes with drawbacks.  A main rotor is much more complex to design and analyze compared to fixed wing, and has efficiency and top speed limitations.

The primary responsibility of the fuselage is to house the pilots, passengers and cargo.  The fuselage adds weight and drag to the helicopter that must be overcome, primarily by the main rotor. 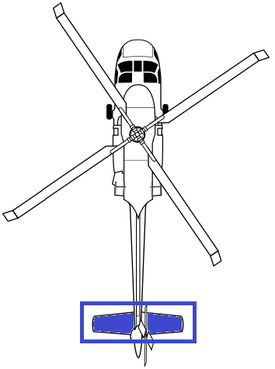 Most helicopter include one or two turboshaft engines, typically mounted near the main rotor.  These engines have an output shaft that spins much faster than the desired main (or tail) rotor speeds (but at a constant speed, like the rotors).  The drive system includes gear reduction and facilitates turning the rotor shafts at specific, lower speeds.  The tail rotor normally spins about 5 times faster than the main rotor.