The feel of the primary flight controls (collective, cyclic, and pedals) play an important role in the perceived handling qualities of a helicopter.  Stiff, hard to move controls may enhance stability but can fatigue a pilot and inhibit precise maneuvering.  Loose, floppy controls are easier to maneuver, but increase pilot workload and allow inadvertent control inputs.  In this article we discuss such properties for a helicopter.

Primary flight controls are grouped into two general categories:  irreversible and reversible.  Irreversible systems have hydraulic or electromechanical power servos between the cockpit controls and the swashplate, which ultimately pitches the blades.  The aerodynamic forces on the blades have no impact on the feel of the controls.  The pilot can push/pull the control with the same force independent of the flight condition.  Most helicopters over about 8,500 pounds have irreversible control systems.

Reversible control systems do not isolate blade dynamics from the pilot’s control feel.  Blade pitch inertia and aerodynamic pitching moments feed back to and affect the pilot.  These systems often include mechanical advantage or dynamic balancing to reduce the load on the pilot’s arm/leg.  They may also include a spring to help hold the control around a desired “trim position.”  The advantage of these systems is simplicity: they are more reliable and easier to maintain.

Pilots have other tasks, in addition to controlling the flight path.  They may need to check a map, talk to people or look for targets on the ground.  Hence, anything the control system can do to lessen pilot control workload is beneficial.  This is what trim systems are made for.   When a pilot achieves a desired flight state, say 80 knots cruise, he can engage a trim system to help maintain that state.  The trim system will apply forces to hold the controls in the required position.  They will apply an increasing force as any control deviates from the position.  These forces are designed to reduce pilot workload without harming controllability.

When a trim system is engaged, the force a pilot must provide to hold a control at a position is called the static control force.  The force required to move the control very slowly and steadily is the quasistatic control force, which amounts to the static force plus friction.  This excludes damping forces that resist quicker stick motions.  Quasistatic forces are characterized by the following properties.  All the properties are shown in an example force versus displacement plot (Figure 1).  A real-world plot is provided in Figure 2. 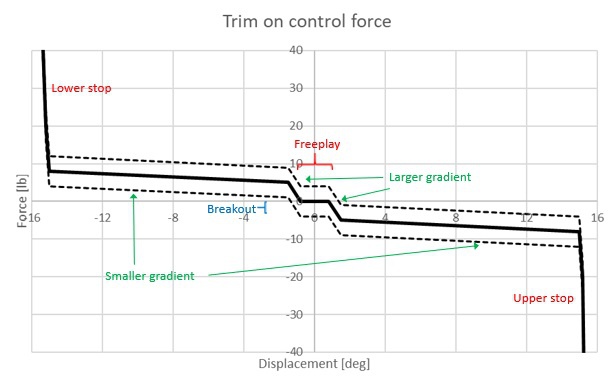 Figure 1.  Static and quasi-static control forces.  The solid line shows the static forces that would be required to hold the control fixed at the specified displacement.  The dashed lines show the quasistatic forces which include additional friction acting against the direction of control motion. 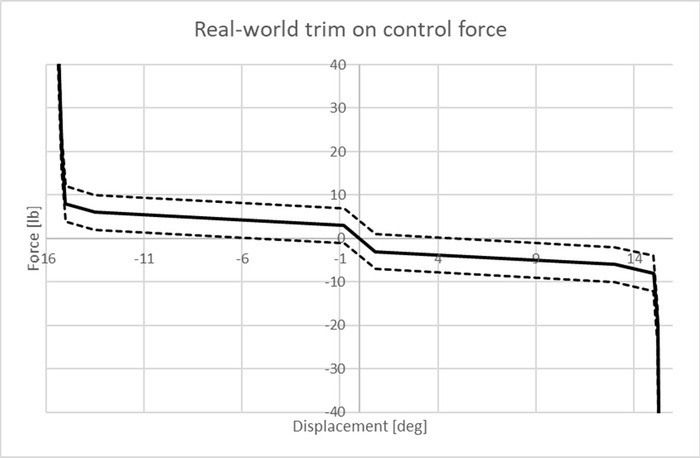 Although not present in the above plots, an additional quasistatic force is present at extreme aircraft attitudes in flight.  The controls have mass and hence gravity may pull this mass noticeably, effectively biasing the control forces in a particular direction.   For example, consider a helicopter in a steep dive.  The nose down pitch angle causes gravity to pull the cyclic forward, increasing the force required to pull up out of the dive.

When controls are moved faster, two more forces become relevant: damping and inertia.  Control damping increases with the speed of control movement.  For example, if the longitudinal cyclic is pressed forward very quickly, a damping force will push back against the direction of motion.  This is different from friction because friction does not increase with speed, while damping does.  Damping is added to heighten pilot awareness of control motion, prevent problematic pilot-induced oscillations, and reduce pilot control “jerkiness.”  For example, damping in the pedals can reduce yaw oscillations and tail boom stress.  Inertia, associated with control mass, acts against control acceleration.

These forces are typically measured by releasing a control after displacing it a fixed distance from trim center.  The position of the control as a function of time is recorded until the control ceases to move.  The control will typically settle back in the trim center position but may have a few overshoots.  Figure 3 is a theoretical plot of a control position after releasing it from a 14deg off-center position.  Figure 4 is a plot of a real control release showing how, in reality, the damping often prevents overshoots. 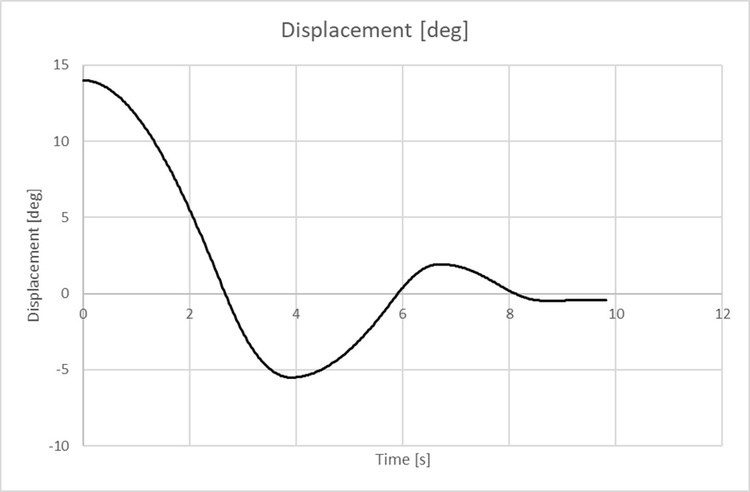 Figure 3.  Theoretical displacement of a control after being released from a position away from trim center. 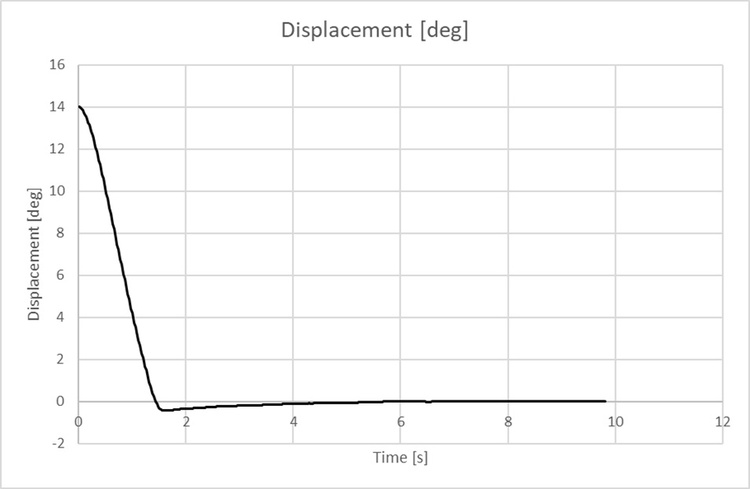 Figure 4.  Real-world plot of the displacement of a cyclic control after being released from a position away from trim center

When a pilot wants to maneuver to a new flight condition, he may disengage the trim system or “beep” the controls to the new flight condition.  A beep button is typically found on the control sticks that.  When "clicked," this button moves the trim system to center about a new position.  For example, the longitudinal cyclic may be “beeped” forward to transition from 80 knots to 90 knots cruise.  Important metrics for the beep system include the rate at which it moves sticks (the so-called trim rate) and the delay from when the beep is pressed until the control starts moving (trim lag).

The trim system may be turned off, either indefinitely by a cockpit switch or temporarily by holding a force trim release (FTR) button.  This effectively removes force gradients (including breakout force) by releasing the fixed end of a spring so that it doesn’t stretch or compress with control movement.  This leaves the friction and stops as the only quasistatic forces.  A plot of the quasistatic forces Vs displacement with the trim off is shown in Figure 5. 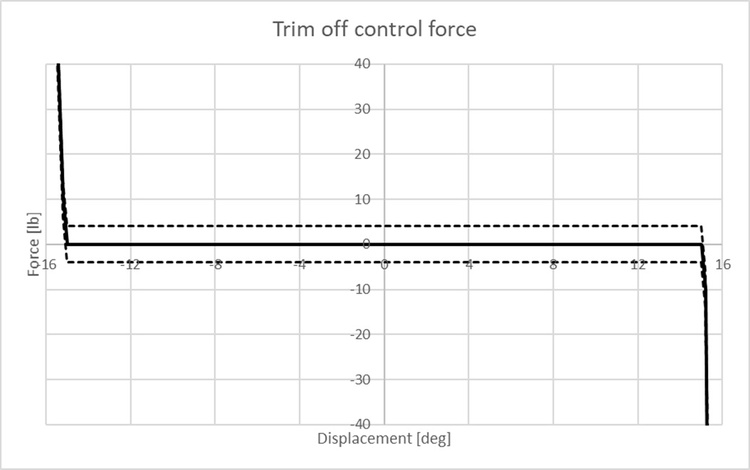 Figure 5.  Quasistatic forces on an irreversible cyclic control with the trim system turned off.

Control force measurement (CFM) equipment is used to measure the forces and positions of flight controls, and even generate the types of plots shown above.  Such systems include calibrated force and position transducers, inclinometers, and other hardware to attach to control grips.  These systems also include software to read and store sensor outputs.  The most commonly used kits are made by Moog.