Most helicopters include four primary controls:  collective, longitudinal cyclic, lateral cyclic and pedals.  The pilot holds the collective control in his left hand and raises it to make the helicopter climb (and lowers it to make the helicopter descend).  The pilot’s right hand grips the cyclic control which he moves longitudinally to pitch the aircraft (longitudinal cyclic) and laterally to roll the aircraft (lateral cyclic).  The pilot’s feet rest on pedals which, when pressed down, yaw the aircraft.  Larger helicopters often have an automatic flight control system (AFCS) to assist the pilot with these controls and reduce workload. 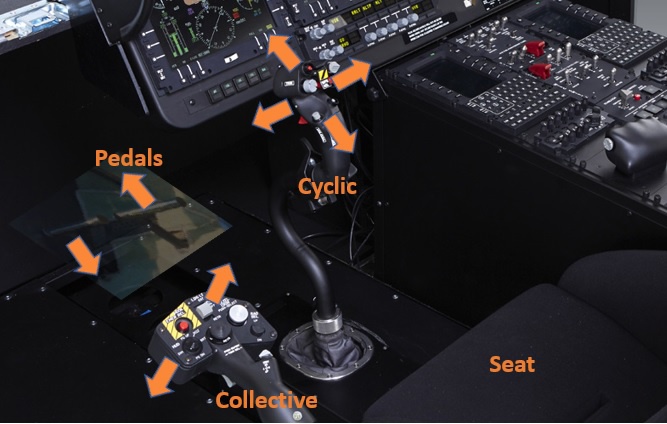 How the Controls Work

In a traditional helicopter, raising the collective increases the pitch angle of the main rotor blades.  To distinguish blade pitch from aircraft pitch, people often refer to blade pitch as feathering.  The collective control feathers all main rotor blades by the same amount, as opposed to cyclic controls described below.   The feathering angle impacts blade aerodynamics.  Specifically, higher feathering--associated with raising the collective--increases lift and thereby main rotor thrust.  Increased thrust mostly pulls the helicopter up.  As a side-effect, aerodynamic drag also increases with collective/feathering.  This increases the engine power and results in an off-axis yaw response. 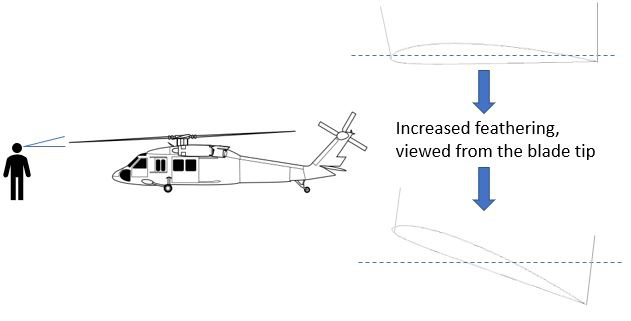 The pilot moves the longitudinal cyclic control forward to pitch the aircraft nose down, and pulls it aft to pitch the aircraft nose up.  This is also accomplished by feathering the main rotor blades, but is more complicated than the collective control described above.  This control adds feathering that changes as the blade moves.  Pushing the cyclic forward increases the feathering angle on retreating blades, but decreases it on advancing blades.  This is accomplished with a device called a swashplate.  We’ll describe cyclic behavior in more detail in the Cyclic Controls section down below.

Moving the cyclic control forward and pitching the nose down also causes the helicopter to increase airspeed.  As the main rotor tilts forward thrust pulls the helicopter forward like a propeller.  Of course, this means less thrust is acting vertically so that the helicopter will accelerate down.  Likewise, if already in forward flight, moving the stick aft decreases airspeed and causes the aircraft to climb.

The pilot moves the lateral cyclic control right to roll the helicopter right side down, and moves it left to roll the left side down (from the pilots point of view, looking forward).   This too is accomplished by feathering main rotor blades.  This is described in the Cyclic Controls section down below.

Moving the control right and rolling the right side down causes the aircraft to accelerate right.  This control is also used, in conjunction with the pedals, to turn the aircraft to a new heading in forward flight.

The pedals control the helicopter's yaw/heading.  When a pilot pushes down on the left pedal the helicopter’s nose turns left, pushing the right pedal turns the nose to the right.  Unlike the other controls above, pedals do not affect the main rotor.  Pedal movements feather the tail rotor blades.  It's analogous to the collective control, only applying it to the tail rotor instead of the main rotor.

Tail rotors on American helicopters typically produce thrust to the right.  This follows from the fact that main rotors spin counterclockwise (viewed from above).  When the left pedal is pressed the tail rotor feathers to increase thrust.  This thrust pushes the tail right, which effectively turns the helicopter's nose to the left.  Likewise, pressing the right pedal decreases tail rotor feathering and turns the nose right. 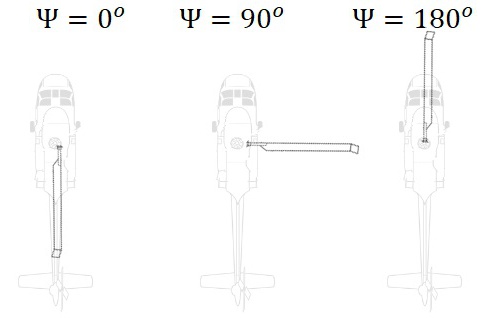 This "feathering pattern" is accomplished using a device called a swashplate, described here.  Since forward longitudinal cyclic pitches the nose down, you might expect it to govern \(\theta_C\) – increasing pitch (and hence lift) of the main rotor over the tail and decreasing it over the nose.  However, it turns out that \(\theta_C\) primarily increases with left lateral cyclic.  This is because blade aerodynamic forces are not transmitted to the helicopter as you might first guess.  Increasing \(\theta_C\) does increase rotor lift aft, over the tail.  However, the effect of this is to accelerate blades upward over the aft portion of the rotor.  This vertical movement of the blades relative to the fuselage is called flapping.  It turns out that \(\theta_C\) flaps the blades to a peak height near \(\Psi=90^o\).  The exact \(\Psi\) depends on the rotor design as described here.  This flapping means that the main rotor thrust is tilted left, providing a leftward force and a rolling moment.  For many rotor designs, this lateral flapping will also create a moment about the rotor hub, which adds the roll moment due to the tilted thrust.

By an analogous argument, moving the longitudinal cyclic aft primarily increases \(\theta_S\).  Increasing \(\theta_S\) accelerates blades upward over the right side of the helicopter and results in peak flapping over the nose.  This has the effect of tilting the thrust aft and increasing aircraft pitch.

Helicopters are not as stable as fixed wing aircraft and can require significant concentration to maintain attitude.  Larger, modern helicopters have automatic flight control systems (AFCSs) to assist the pilot.  These may perform a number of useful functions including increasing stability, holding attitude/altitude/airspeed, and even coordinating turns.  Some helicopters have “flight director” modes that fly the helicopter along a desired path.  These are all accomplished by changing the same four controls mentioned above.  Rarely, the AFCS may also pitch the horizontal stabilizer (e.g. in the Bell UH-1Y).