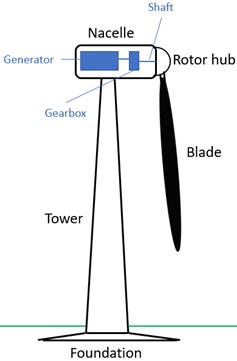 Wind turbine foundations are more complicated than foundations for other structures.  This is due to the rotor producing a large aerodynamic (thrust) force downwind, effectively trying to tip over the wind turbine.  The foundation must be able to handle this load from any direction - a wind turbine's rotor may turn (yaw) 360 degrees to face into any wind.

Many foundation designs may be used.  For onshore wind turbines, the design may depend on the soil/rock composition in the target location.  The most common design is a gravity foundation with large spread footing.  Offshore wind turbine foundations depend on the water depths and sea floor composition.  The most common design is a monopile – a single column “stabbed” deep into the seabed.

Towers generate undesirable aerodynamic interference on blades passing nearby.  This can (1) reduce energy capture, (2) create an undesirable periodic noise and (3) fatigue the turbine via the sharp change in aerodynamic loading.  For this reason, an aerodynamically transparent tower would be attractive.  For example, a very narrow tower or a tower located further from the rotor.  However, these traits increase cost - a balanced design must be chosen.  (Modern wind turbine rotors operate upwind of the tower to reduce the tower effect on the blades.)

Many older turbine's used lattice towers.  Such towers were cost/material efficient, but they have been replaced for aesthetic reasons.  Modern towers are made of 20-30-meter tubular steel sections which are bolted together on site.  These are conical, increasing in diameter near the ground for structural efficiency.

The low speed shaft attached to the rotor enters the front of the nacelle.  This shaft typically feeds into a gearbox which converts the rotational energy to a higher speed / lower torque that is more desirable for the generator.  However, there are “direct drive” wind turbines that do not include a gearbox - the low speed shaft directly powers the generator.  There’s no free lunch however – the increase in generator cost for a direct drive system offsets the savings of circumventing a gearbox.  The generator outputs A/C electricity.

A mechanical drum or disk brake inside the nacelle assists in slowing the rotor in emergency situations (this is in addition to blade pitch which aerodynamically slows the rotor).  Typically a rotor lock is also included to hold the rotor fixed without wearing the brakes.

The rotor hub attaches to the front of the nacelle and to the low speed shaft.  The blades are bolted to the hub, but typically via an intermediary bearing that allows the blades to pitch.  Pitch motors are often included within the hub to set blade pitch angles.  Older, “stall regulated” blades were bolted directly to the hub.  The wind turbine's controller commands a blade pitch angle (mostly as a function of wind speed), which the pitch motors follow.

The blades on a wind turbine are pushed by the wind to create power on the low speed shaft.  Blade shape is critical to maximize this power.  Aerodynamic design, including high lift to drag ratio with suitable twist and chord distribution enable efficient capture of wind energy.  However, the aerodynamic design is constrained by other factors described below.

Shipping constraints often limit the cross-sectional size of the blade, particularly near the hub.  It’s possible to design a modular blade that is disassembled for shipping, but the cost has traditionally been prohibitive.  This may change in the future.

Structural efficiency requires portions of the blade to be thicker than aerodynamically optimal.  To have the same strength, thinner blades must incorporate more or alternate material and hence increase cost.  Wind turbine blades are thinner near the tip where aerodynamics is more important and strength is less important, but thicker (often cylindrical) near the hub where strength is paramount.

Blade noise is another consideration.  Some wind turbines are located near residences where complaints can jeopardize future projects and even cause existing turbines to be curtailed.  Hence, blade shape is often constrained by noise, particularly near the tip where small changes in shape can have a large impact.  Noise may also impact blade design in another way – lowering the rotor speed.  Noise increases with the 5th power of rotor speed, sometimes requiring rotor designs that can operate efficiently at lower “tip speed ratios.”

Yet another concern is the soiling of blades bombarded by insects and dirt in operation.  This effectively changes the aerodynamics of the blades and can promote early stall, drastically reducing a turbine's energy production.  Frequently cleaning blades is typically not feasible.  Hence, blades must be deigned with a level of “roughness insensitivity” – the ability to maintain acceptable lift/drag coefficients even when contaminated by bugs/dirt.  Such designs reduce the “clean” performance of the blades but increase the average performance.