Momentum theory provides a relatively simple estimate of how a helicopter rotor changes (induces) airflow.  We’ll focus here on a helicopter main rotor in hover (i.e. a rotor that's powered, accelerating air that is otherwise at rest relative to the rotor).  The analysis can be generalized to other flight regimes and even wind turbines that are powered by the air, but we will save that for another day.  (Even in the simplest context, this concept can be difficult to understand at first.)

We’ll start by listing the assumptions required for this analysis.  These assumptions are not satisfied by practical helicopter rotors, but the results provide convenient approximations widely used in the helicopter industry.   The most useful equations derived from these assumptions will be highlighted at the bottom of this article.

The rotor attains thrust \(T\) by pushing air downward.  Newton’s equation \(F=ma\) is used to equate the thrust (\(F\)) to the rate of momentum change of the air \(ma=\frac{dp}{dt}\) (\(p=mv\)).   The change in momentum is achieved by accelerating the air downward.  The acceleration begins at some distance \(d_0\) above the rotor and continues to some distance \(d_3\) below the rotor (see diagram down below).  Since the thrust is finite, the accelerated air is confined to a finite volume called the streamtube.  The radii of this tube at different heights can be related using conservation of mass – the rate at which air mass enters any volume of the streamtube (mass flux) must equal the rate that air mass flows out.  The mass flux through a cross section \(s_x\) from the diagram down below, with area \(A_x\)  is just \( \rho A_x v_x\).  Since the volume enclosed by \(s_x\) and some other cross section \(s_y\) must have 0 net mass flux, we arrive at this useful equation (after dividing by \(\rho \))  $$ \begin{equation} A_x v_x = A_y v_y \label{eq:massflux} \end{equation}.$$

We’ll use the conservation of energy to equate the power applied by the rotor to the rate that energy is added to the air.  We’ll also use Bernoulli’s equation above and below the rotor to generate to eliminate many variables and reach relatively simple equations for the induced velocity and power as a function of thrust. 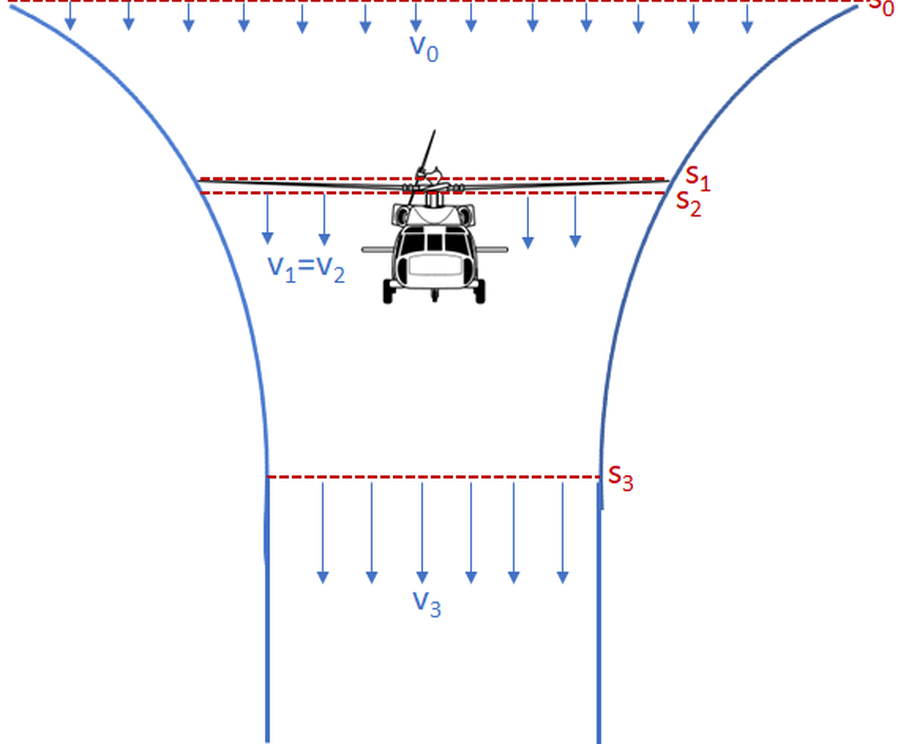 Dividing \eqref{eq:conserve} by \eqref{eq:fma} and doing some arithmetic reveals that the airspeed is twice as large in the far wake, compared to the rotor $$\begin{equation} v_1=\frac{1}{2}v_3 \label{eq:veleq} \end{equation}.$$