This article discusses how the main rotor collective control is rigged for autorotation.  This rigging refers to the range of blade pitch/feathering angles associated with moving the collective control from full down to full up.   It can be, for example, 0 to 20 degrees or -1 to 19 degrees depending on the rigging.  This is adjusted to attain specific rotor speeds (NR) during autorotation at the lowest collective setting.  We will see that this depends on the target operating environment of the helicopter (specifically air density).  First, a short review of relevant properties of autorotation.

Before discussing the rigging, let’s cover a few relevant points about autorotation.  Herein we will always be talking about steady state autorotation at a fixed airspeed, say 60 knots.  In this flight condition, the air rising though the rotor (due to the aircraft descent rate) keeps the rotor turning at a fixed speed, even without engine power.  This speed increases with (1) lower collective blade angle, (2) larger aircraft weight or (3) lower air density.  For instance, a lighter helicopter with less passengers/cargo needs a lower collective blade angle to achieve the same NR as a heavier helicopter.

One of the pilot’s top priorities in autorotation is to keep NR within a specific range, typically close to 100.  Pilot’s achieve this by moving the collective: if the rotor speed drops too much they lower the collective, and if it rises too much they increase collective.  The pilot must be able to maintain this NR range whether flying a fully loaded, heavy aircraft or an empty, light aircraft.  Furthermore, he/she must be capable of doing this in the most extreme low- or high-density altitude environment.  This is where the collective rigging comes into play.  We’ll see below that rigging provides lower blade angles for aircraft operating at lower density altitudes (higher air density) and vice versa.

Before rigging the collective, a minimum operational density altitude DA0 must be established.  This is done by checking the historical climate for the region(s) in which the helicopter will operate.  Knowing DA0, the chart below specifies NR as a function of (1) gross weight (GW) and (2) the operating density altitude minus DA0 (the “delta density altitude”).  These NR values are associated with steady descent at a specified airspeed - 60KTAS here.  A pilot will fly the helicopter (at a certain weight) at 0 collective and idle engine(s) and record NR versus density altitude.  If the NR is above (right) of the target in this chart, the blade angles will be increased by a prescribed amount.  If the NR is too low, the blade angles will be decreased by a prescribed amount.  The pilot and maintainer may repeat this process a few times until the helicopter matches the chart. 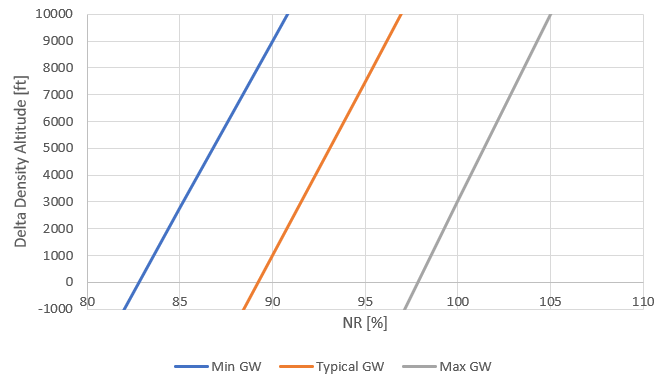 More About the Chart

As you can see from the chart above, target NR values are larger when a helicopter is more heavily loaded (larger GW).  More rotor thrust is required to counter larger weight, and that thrust is generated by descending faster with larger up-flow through the rotor and NR.  Furthermore, target NR increases as the density altitude increases (air density decreases).  All else equal, lower air density reduces all aerodynamic forces including thrust.  This is compensated by again descending faster with larger NR.

Consider two helicopters A and B (same model, using the plot provided above) expected to fly in regions with minimum density altitudes of -5000’ and -1000’ respectively.  If both aircraft are calibrated at the same time, at 3000’ density altitude and max GW, then what NR should the aircraft be calibrated to?