There are several ways to measure helicopter performance.  Top speed, range and acceleration are probably familiar to car drivers.  However, other factors like hover ceiling and loiter time may not be familiar to the average person.  Below we will explore these and other metrics for helicopter performance.  We will also discuss properties of power consumption, which is important for many of these performance metrics.

The hover ceiling is the maximum altitude at which a helicopter can hover.  At higher altitudes air is less dense which makes both the rotor and engine less efficient – more power is required by the rotor and less power is available from the engine(s).  A chart like the one below may be used to specify the hover ceiling.  It shows the maximum pressure altitude that a helicopter can hover as a function of weight and temperature.  Air density is the important value governing hover ceiling, but pressure altitude and temperature are more readily available.  Together these two values mostly determine the density.  Charts typically use weight on the horizontal axis and pressure altitude on the vertical axis, as shown below.  Notice separate lines in the chart for each temperature - higher temperatures correspond to lower air density and therefore lower pressure altitude. 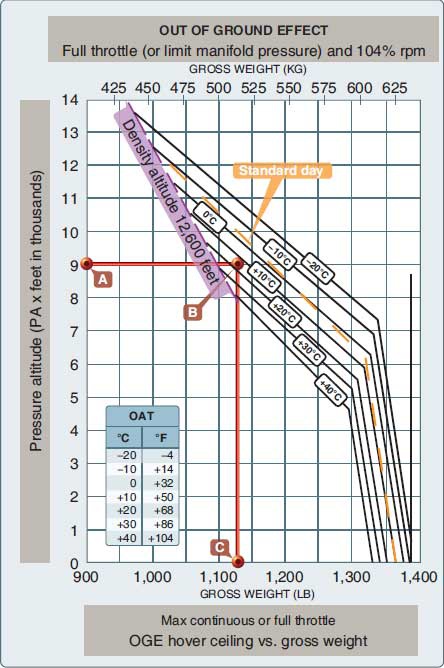 A few notes about this performance chart.  This ceiling is out of ground effect (OGE), meaning it's well above the ground.  When a helicopter is near the ground the rotor is more efficient and can hover at lower air density (higher pressure attitude).  For this reason, two charts like the one above are normally provided: one for in ground effect (IGE) and another for out of ground effect (OGE).  A little more about the physics of this is provided below.  Also, contrary to what you might guess, a helicopter requires less power with moderate forward speed as explained below.  Hence, a helicopter can fly above it's ceiling with speed.  Lastly, this ceiling is at maximum continuous power (MCP).  Most helicopters can use more power than MCP, as long as this power is limited to a short time period.  For example, higher two minute or 30 second power limits are often provided, enabling a pilot to exceed MCP when necessary.

Hovering requires more power than cruising.  Hence, it’s possible to cruise at a given altitude, but not be able to slow and hover there.  Why?  Aircraft maintain altitude (counteract gravity) by accelerating air downward.  In hover, a helicopter is engulfed in this downward flowing column of air.  This makes the main rotor less efficient, like a kayaker paddling upstream.  The phenomenon is called induced drag on the rotor.  With forward speed, the helicopter moves out of this column of air, partially accessing less disturbed air in front of it.  This reduces induced drag.  (The speed of this downward flowing air may be estimated using momentum theory as described here.)

The air thrown down by the helicopter must slow to have no vertical velocity at ground level.  When close to the ground, this ends up reducing the downward airflow all the way up to the main rotor.  This means induced drag is reduced near the ground and the rotor becomes more efficient.  This is the ground effect phenomena previously mentioned.  This becomes relevant when the main rotor is within a diameter of the ground, and increases as the rotor gets closer to the ground.

Loiter time is particularly important for smaller helicopters used in law enforcement, news and sightseeing.  This is the maximum amount of time the helicopter can stay aloft before refueling.  It's about 4 hours for commercial helicopters such as the Bell 505 and 412EPI.  This requires the helicopter to fly at a specific airspeed, often around 60 knots, called the loiter speed.  Loiter speed is the airspeed with the lowest fuel flow rate - smaller or larger speeds will burn fuel faster and reduce time aloft.

The example plot below shows fuel flow rate versus airspeed and marks the loiter speed.  Knowing this fuel flow rate \(R\) and the aircraft fuel capacity \(C\), one can estimate the loiter time as \(C/R\).  To be more accurate, \(R\) also changes with weight and atmospheric conditions.  Since weight drops as fuel is burned in a flight, \(R\) decreases within a flight. 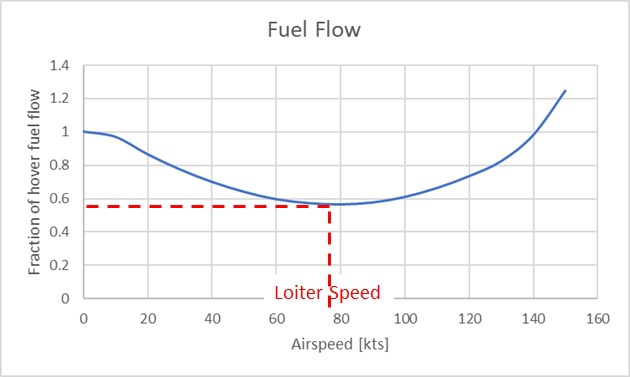 Another critical performance metric is a helicopter’s range.  Range is the distance a helicopter can fly without refueling and assuming no wind.  This is about 300 to 400 nautical miles for modern commercial helicopters.  Range is dependent on the weight (passengers and cargo onboard), airspeed and atmospheric conditions.  Of course, range shrinks with added weight.  The airspeed that provides maximum range is not the same as loiter speed.  Flying faster, while burning more fuel per unit time, burns less fuel per unit distance.   Hence, range increases as airspeed increases above loiter speed.  This is true up to a limit called the max range airspeed (MRA).  Beyond MRA, the fuel burn per unit distance increases.  Flying at MRA will get the helicopter from point A to B while consuming the least fuel.  However, helicopters are often flown faster for passenger convenience.

Breaking Down the Power Required

The power required by the helicopter governs most of the performance metrics we've discussed.  This power may be subdivided into profile power, parasite power, induced power, and others we’ll categorize as miscellaneous (this is how most books on helicopter performance do it).   The plot below gives a rough idea of how these values change with airspeed.  We’ll explain all the values below. 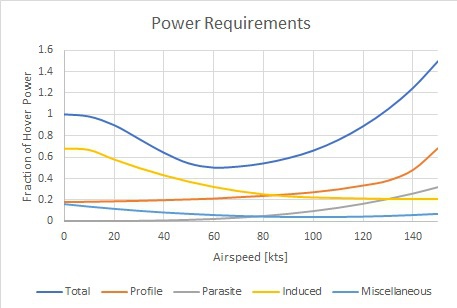 To compute profile power for the entire rotor, Equation \eqref{eq:prof2} can be multiplied by the number of blades and integrated from the blade root to \(r=R\).  However, Equation \eqref{eq:prof2} is enough to see the trends.  Profile power increases with the square of the helicopter airspeed \(v\) and is minimum in hover, where \(v=0\).  Recall that this was assuming a constant drag coefficient.  At large speeds, portions of the blade suffer from compressibility effects when advancing (\(\psi \approx 90^o\)) and stall when retreating (\( \psi \approx 270^o \)), causing \(c\) and therefore \(P\) to increase further.

Induced power is what we eluded to in the hover performance section above.   The velocity of air thrown down by the main rotor is called induced velocity.  Its magnitude can be estimated using momentum theory.  It causes the net direction of air movement relative to a main rotor blade to be tilted down from the horizontal.  The diagram below shows a cross section of a rotor blade and the velocity of air relative to it: the left blue arrow labeled V (total).  Lift is perpendicular to this velocity and hence it’s not directly upward, but it's partially tilted rightward in the diagram.  The horizontal component of that lift vector (dashed line near the top of the diagram) is called induced drag and pushes back against the rotor rotation.  The power required to overcome this component of lift (keep the rotor turning at full speed) is induced power.  As you might expect from earlier discussion, this power is largest at hover and low speed and reduces at higher speeds where the rotor accesses “cleaner” air (with less induced velocity).

Miscellaneous power includes losses in the drive system, power required for avionics, hydraulic pumps, the tail rotor, etc.  This is normally less than 20% of the total power required.